The fiscal policy associated with the gabelle was imperious and unequal, and thus led to intense contraband. Smugglers would sell salt, often stolen or procured in the less-taxed regions.  The black market functioned in all phases of production, transport and sales.  In the saltworks, visitors and workers alike would sweep up the salt powder called “pousset.  They might also subtly remove entire salt loaves and even brine which they then transformed in clandestine workshops. While being transported, salt blocks might be scraped so that powder could be removed.  Finally, merchants, storage facilities and shops were regularly robbed. Smugglers, including the famous Mandrin who roamed the countryside at the beginning of the 18th century, ranging from Franche-Comté to Provence, could count on the help of a  population totally exasperated by this tax. 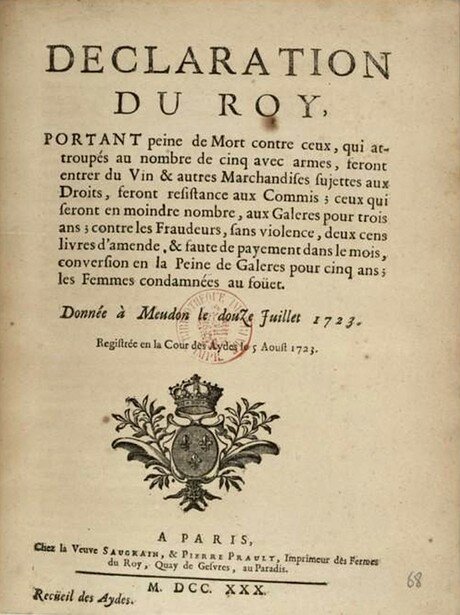 Salt smuggling was not without risk.  Smugglers were subject to heavy fines and could be branded with a red “G” for “gabelle”. As of the end of the 17th century, they could also be condemned to the galleys or to a death sentence, in the case of a repeated offense committed in an organised gang.

To prevent smuggling, the tax collectors set up control points between the different provinces, manned by guards called “gabelous”.  Along the borders of Brittany, for example, the gabelous were organised into brigades stationed every half-league (about 2.5 kms) along distances of three or four leagues (about 34 kms).

In Salins-les-Bains, the saltworks called upon specialised police agents called « les forestiers ». Anyone arrested was brought before a special saltworks tribunal where they risked heavy fines, corporal punishment (straitjacket, whipping, pillory) or banishment.  When Franche-Comté became part of France in 1764, it was the saltworks employees and gabelous who pursued the smugglers. 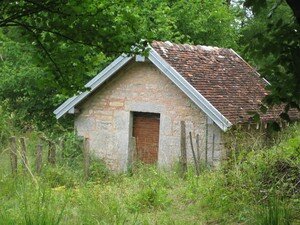 A century later, the brine pipeline was built between the saltworks of Salins-les-Bains and Arc-et-Senans, offering new possibilities to smugglers. A surveillance system was set up: six different control houses, two of which are still standing today, were built along the trail.  The gabelous thus watched over the pipeline, tracking down salt thieves who pierced holes in the pipes so as to steal the brine.

To see: Two checkpoint houses still remain standing today, one just as you leave Salins-les-Bains and the other at Port-Lesney. For the one at Port-Lesney, go along the Gabelous Trail to the stop point called "A pipeline under high surveillance".

The gabelous were profoundly detested by the smugglers, but also by the local population.  The salt tax that the tax collectors were in charge of recovering brought them a comfortable  revenue, whereas it impoverished those who had to pay it.  In addition, they had full power to track down the smugglers: ambushes, search warrants, body searches, etc.  Since they received a bonus for every arrest, the gabelous did not hesitate to make arbitrary accusations.

Smuggling, a tradition in Franche­-Comté

In Franche-Comté, « false salt making » was part of a long tradition of smuggling that also included other products such as tobacco.  With the gabelle, salt, too, became a product coveted by smugglers. The local obligations of purchase, along with the tax rate differences between provinces and countries, made it a prime product for the black market.

In Franche-Comté, the Royal Edict of 1703 declared as false salt “any salt other than that from the saltworks of Salins.” Three or four times less expensive than in the neighbouring high salt-tax provinces such as Burgundy, the salt of Franche-Comté gave rise to much smuggling between the two regions. However, it was more expensive than in Lorraine where salt was sold at cost to the Swiss cantons, as stipulated in treaties and diplomatic agreements. Smuggling was thus organised from Lorraine to Franche-Comté, via Switzerland.  Trafficking was particularly well developed on the periphery of the province: in Bresse, in the region of Sellières and around the Forest of Chaux. Some villages specialised in this activity, like Fourgs or Les Rousses, located on the roads leading from Salins to Switzerland.  Veritable smuggling networks were organised with relays and meeting points in certain cabarets in Switzerland and in Burgundy.