A new kind of factory

The Royal Saltworks of Arc-et-Senans owes its existence to the deficiencies of Salins-les-Bains where production could not be increased to meet the rising demand for salt.  To overcome this problem, in 1773 the salt administration began to plan for a new factory, bigger, more modern and more profitable.

The chosen site for the new factory was between the villages of Arc and Senans, 13 kilometres, as the crow flies, from Salins-les-Bains.  The site was vast, situated near major lines of transportation and disposed of a nearly inexhaustible reserve of fuel, the Forest of Chaux with its 22,000 hectares of forest cover.  The only drawback was that it had no source of salt water. Never mind!  The brine was to be brought from Salins-les-Bains via a lengthy pipeline.

To see: Discover the Forest of Chaux, with its sacred oaks, its columns by Guidon and its shelters. Meet at the "Saline Royale" stop on the Gabelous Trail. 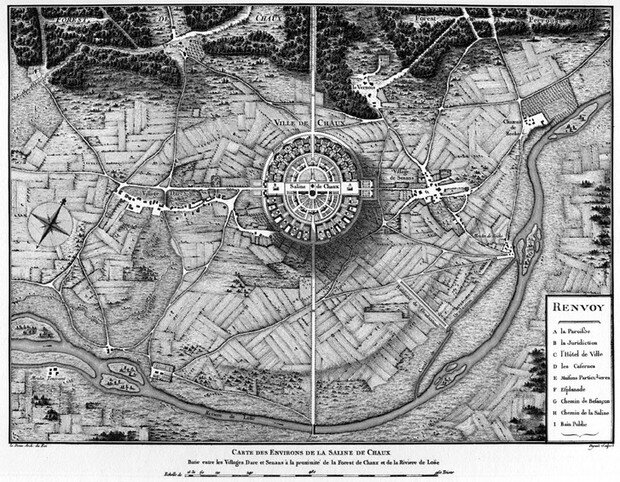 Construction of the new saltworks was entrusted to Claude-Nicolas Ledoux, then commissioner of saltworks for Franche-Comté, Lorraine and the territories then known as the Trois-Evêchés (Metz, Toul and Verdun) in north-eastern France. After an initial project was rejected, Ledoux’s proposal was approved in 1774 and construction began in 1775.

The new saltworks in Arc-et-Senans was a factory of an entirely new kind. In addition to being an industrial site, its first vocation, it was home to the personnel who worked there and it also constituted a remarkable architectural complex. This aestheticism made it unique, showing a care that until then had been reserved for palaces and temples.