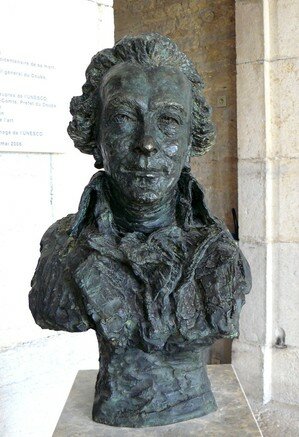 Claude-Nicolas Ledoux was the architect of the Royal Saltworks of Arc-et-Senans. He was also one of the most productive architects and urban planners of his time.

Claude-Nicolas Ledoux was born in 1736 in Dormans, in Champagne.  The son of modest merchants, he learned to draw with his mother and godmother.  Noted for his intelligence, he obtained a bursary to continue his studies in Paris, at the Collège de Beauvais.  There he discovered ancient literature and sciences, and made friendships that would be precious to him later in his career. After his studies he earned his living as an engraver while simultaneously studying architecture with Jacques-François Blondel.

In 1762 young Ledoux’s first customer placed an order, the décor of the Café Godeau, today preserved in the Carnavalet Museum in Paris. This first success allowed Ledoux to pursue this career.  Named architect-engineer for the Bureau of Waters and Forests in 1764, Ledoux worked mainly on functional projects: bridges, fountains, wells, schools and churches, such as the bridges of Marac and Pré-Gibert in Rolampont or the Church of Cruzy-le-Chatel and the choir of Saint-Etienne in Auxerre. This career in civil engineering provided him with the technical experience that would prove so useful a few years later in planning the Royal Saltworks.

At the same time Ledoux undertook works for rich private customers: aristocrats, financiers, artists… He received orders for prestigious chateaux, apartments and mansions. He thus constructed the Chateau de Maupertuis for the Marquis de Montesquiou, the Chateau de Bénouville for the Marquis de Livry, the Chaussée d’Antin for Présidente Hocquart and homes for certain prominent families, the Guimard, d’Hallwyl, d’Uzès, and de Montmorency among others. His reputation grew continually: he became the architect of the moment, the one the wealthy simply had to call upon in order to be fashionable.

The 1770s saw Ledoux at his peak and he eventually began to work for the royal power. It was in 1771 that he truly began to deal with royalty: he built a pavilion in the gardens of Louvenciennes for Madame du Barry, the new favourite of Louis XV. Under the king’s protection, Ledoux was appointed Commissioner of Saltworks for Franche-Comté, Lorraine and the region of the Trois-Evêchés and was then promoted State Inspector of Saltworks for Franch-Comté. Two years later, he was admitted to the Royal Academy of Architecture and became the architect for the Ferme Générale (the financial institution in charge of collecting taxes).

It was at this time that he built the Royal Saltworks of Arc-et-Senans, his greatest undertaking. Secure in his position, he pursued his career fulfilling government orders. He thus built the theatre of Besançon, the prison and Palace of Justice in Aix-en-Provence and a salt cellar in Compiègne.

Beginning in 1785, Ledoux undertook the construction of the wall for the agents of the Ferme Générale in Paris, a network of customs offices where taxes were collected on the merchandise that entered the city.  The architect planned for sixty gatehouses (control points). Each one was different and monumental, in classical style, inspired by the Greek propylaea. Only four of them remain standing today: the rotundas of Parc Monceau and La Villette, and the buildings of Place Denfert-Rochereau and Place de la Nation.

The wall was strongly resented by the people of Paris, as much for its function as for its outrageous aesthetics. A symbol of fiscal tyranny, waste and royal despotism, it was the target of destructive attacks beginning in July 1789.

To see: Four buildings are still standing today: the rotundas of the Parc Monceau and La Villette and the buildings on the Place Denfert-Rochereau and the Place de la Nation. 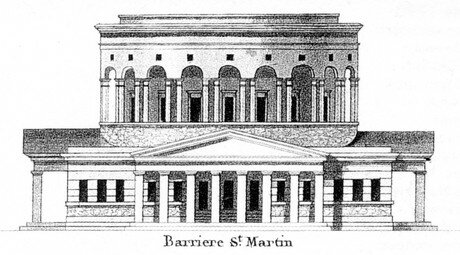 The Ferme Générale project was to get the better of Ledoux’s career.  Faced with the hostility engendered by this work, he was suspended and then revoked definitively in 1789. Four years later he was imprisoned by the revolutionaries for whom he represented nobility and royalty. Liberated in 1795 he had fallen totally into disgrace. Having become known as the cursed architect, he devoted himself to writing his treatise on architecture: L'architecture considérée sous le rapport de l'art, des mœurs et de la législation. One volume only, of the five envisaged, would be published in 1804.  Ledoux died two years later, in 1806, at age seventy.