The brine pipeline is a double pipe.  Two pipes were laid parallel to each other, one metre apart.  This technical decision was taken in order to help overcome any harm that might come to the pipes and thus ensure a permanent flow of saltwater to the Royal Saltworks. If a problem came up in one pipe, the other would remain in use while the first one was being repaired.

The brine pipeline was also buried so as to protect it from several different dangers. From the technical point of view, the pipeline had, above all, to be protected from bad weather and freezing temperatures.  Buried in the ground, the pipes were better preserved and the flowing brine couldn’t freeze in winter. But burying the pipes was also a way to keep the brine from being stolen.  Open-air pipes would have given easy access to thieves and smugglers.  The one metre layer of soil that covered the pipes did not, however, suffice to counter their ambitions. The pipes were frequently tapped and precious salt water was siphoned off.

After the choice of the route, there was the question of the material for making the pipes. At that time several materials were already known and in use.  The most well-adapted material had to be chosen, the strongest, the most resistant to salt and at a reasonable price.  Lead was the most expensive and the least resistant to salt corrosion. Terracotta was too fragile.  Thus, it was wood that was chosen, sufficiently resistant and easily available.  Fir was selected, since its soft heartwood was easy to bore and it was abundant in the local forests. The trunks came from the Forest of La Joux, situated south-west of Salins-les-Bains. 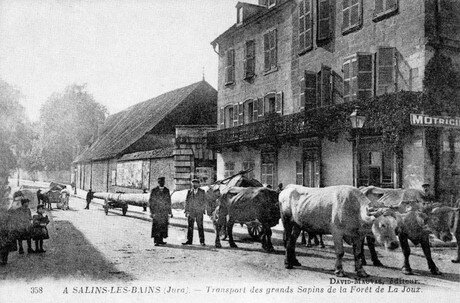 Transported by yokes of oxen, the trees were cut and the heartwood bored out with an auger.  The logs were joined at either end by means of an iron ring called a “frette”. Fifteen thousand tree trunks were thus used to build the brine pipeline and to transport 135,000 litres of brine daily.

A few years later, the firwood pipes were replaced due to a high rate of loss of brine.  Leaks at the joints, fissures, split wood… lead to nearly à 30% loss between Salins-les-Bains and Arc-et-Senans.  Cast iron pipes took the place of those made of wood.  The task was colossal: work began in 1782 and lasted for 80 years.