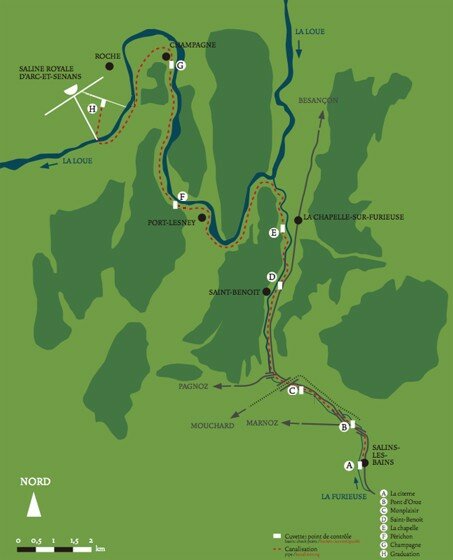 A long and sinuous route…

Salins-les-Bains and Arc-et-Senans are 13 kilometres apart as the crow flies.  But on the ground, it was not possible to follow such a direct route: the brine flow in the pipes had to respect the ground relief.  The pipeline therefore followed the beds of the Furieuse and Loue Rivers, thus taking advantage of the natural slope.  Its length was therefore extended, finally measuring 21.25 kilometres.

The pipeline’s route included many obstacles, some natural, some of human origin.  To overcome them, certain technical alterations were necessary.

Thus, long trenches had to be dug in order to go through the rock that prevented passage.  One such installation is still to be found near Rennes-sur-Loue, in a place called “Aviers”.  Two hundred metres long, it is today overgrown with bushes.  Another, only half as long, is found near Port-Lesney.  It cuts through a butte called “Le Tartot” and is now a road bed.

Another technical passage is found near the bridge of Roz, by the village of Rennes-sur-Loue.  A vaulted passage allowed the pipeline to pass beneath National Route 83.  Built of cut stone, its opening is 2 metres wide.  It is still there today, near the boundary between the Doubs and the Jura departments.

Further on, 800 metres from the Royal Saltworks of Arc-et-Senans, near the Château de Roche, another installation enabled the pipeline to cross the Loue River.  The passage goes beneath the river, through an ordered arrangement of sand, gravel and stone.  First a layer of sand surrounded the pipeline, then a layer of gravel.  A system of stone tiles and oakwood beams finished up the installation, ensuring protection from the river current and any stones it carried. In summer, when the river level is low, one can still see the protective stones.