The brine pipeline was the umbilical cord of the Royal Saltworks, furnishing it with its prime resource.  The pipeline thus attracted great attention.

Regular readings were taken of the brine as it flowed through the pipes.  Control houses were built along the pipeline route precisely for this purpose. A total of six houses were located at points along the way.  Each one had a stone basin where the brine emerged from the pipes. The salinity level and speed of flow were examined and the results compiled.  Every Saturday they were reported to the Royal Saltworks and recorded. 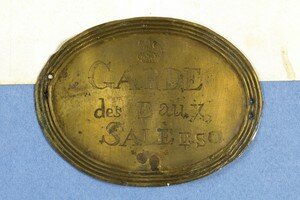 The control houses also had another role.  Regularly spaced along the pipeline, they formed a line of surveillance.  The smuggling of salt was, in fact, widespread and the brine pipeline was repeatedly attacked. Smugglers, then called false salt workers, would puncture the pipeline to siphon off brine and extract the salt. To counter this theft, the guards, called “gabelous”, patrolled the trail night and day to watch over the pipeline and its coveted contents.

Two such control houses are still standing today, one just outside of Salins-les-Bains and the other in Port Lesney.

To see: Two chekpoint houses still remain standing today, one just as you leave Salins-les-Bains and the other at port-Lesney. For the one in Port-Lesney, go along the Gabelous Trail to the stop point called "A pipeline under high surveillance".